Save the output from min two commands (for getting LSA1 and LSA2 ) and upload it to Topolograph with .txt or .log extenstion.

Demo network has already uploaded for everyone. Press `Load dynamic graph` in order to upload it. Once you did it - you can see the topology, bold lines show ECMP links. 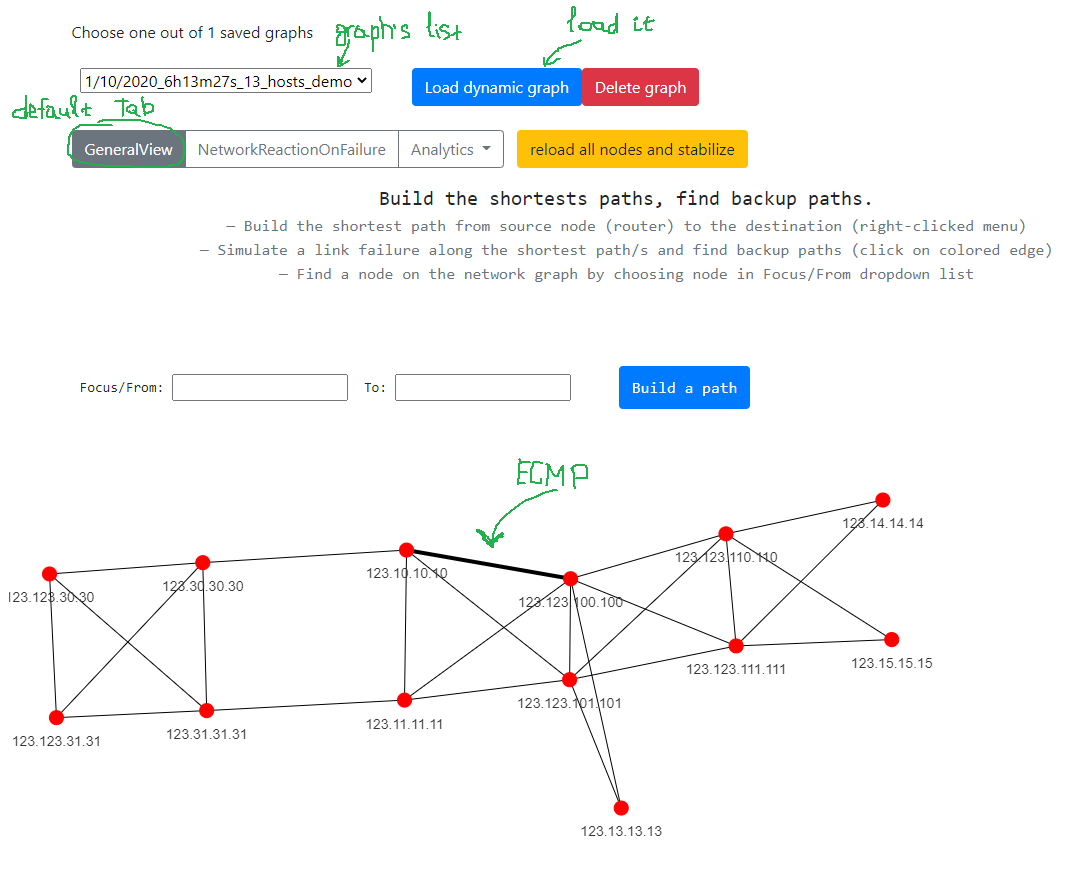 Press on bold line in order to unflat ECMP and see all nested links.

The shortest path. How to build.

It's possible to build the shortest path from a node. Just right click on a node. The description with all nodes and path cost is available above the topology.

Once you set the source and destination - you get colored the shortest path. 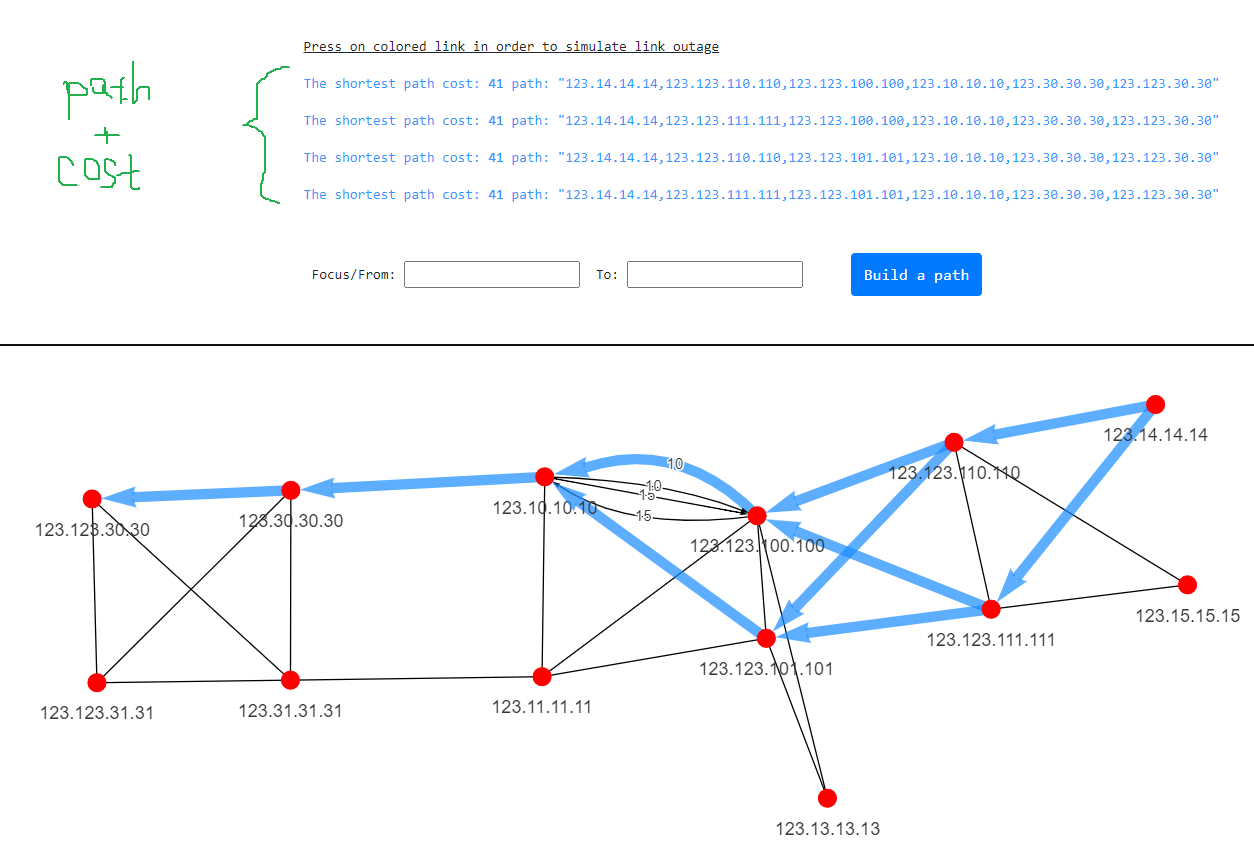 All the shortest paths to all nodes. Minimum Shortest Tree.

New feature of v2.11 release. MST allows see all the shortest paths To or From node. Just activate it from this radio-checkbox.

New feature of v2.11 release. All incoming the shortest paths are built to the node.

New feature of v2.11 release. All outgoing the shortest paths are built from the node.

New feature of v2.13 release. Difference between incoming and outgoing the shortest paths of selected node.

How is it possible to know what networks are terminated on some particular node. Thera are two ways how to know about it. The first one - start typing Node ID in Focus/From field and you will see all terminated networks on the node.

The second method is just to press on a node. New form pops up with a list of all backuped and non-backuped networks. The network is trated as backuped if such network is terminated on min two nodes.

In order to find out the backup path - just press on colored edge. You will simulate a link outage and the shortest path will be rebuilt passing by a 'failed" edge. 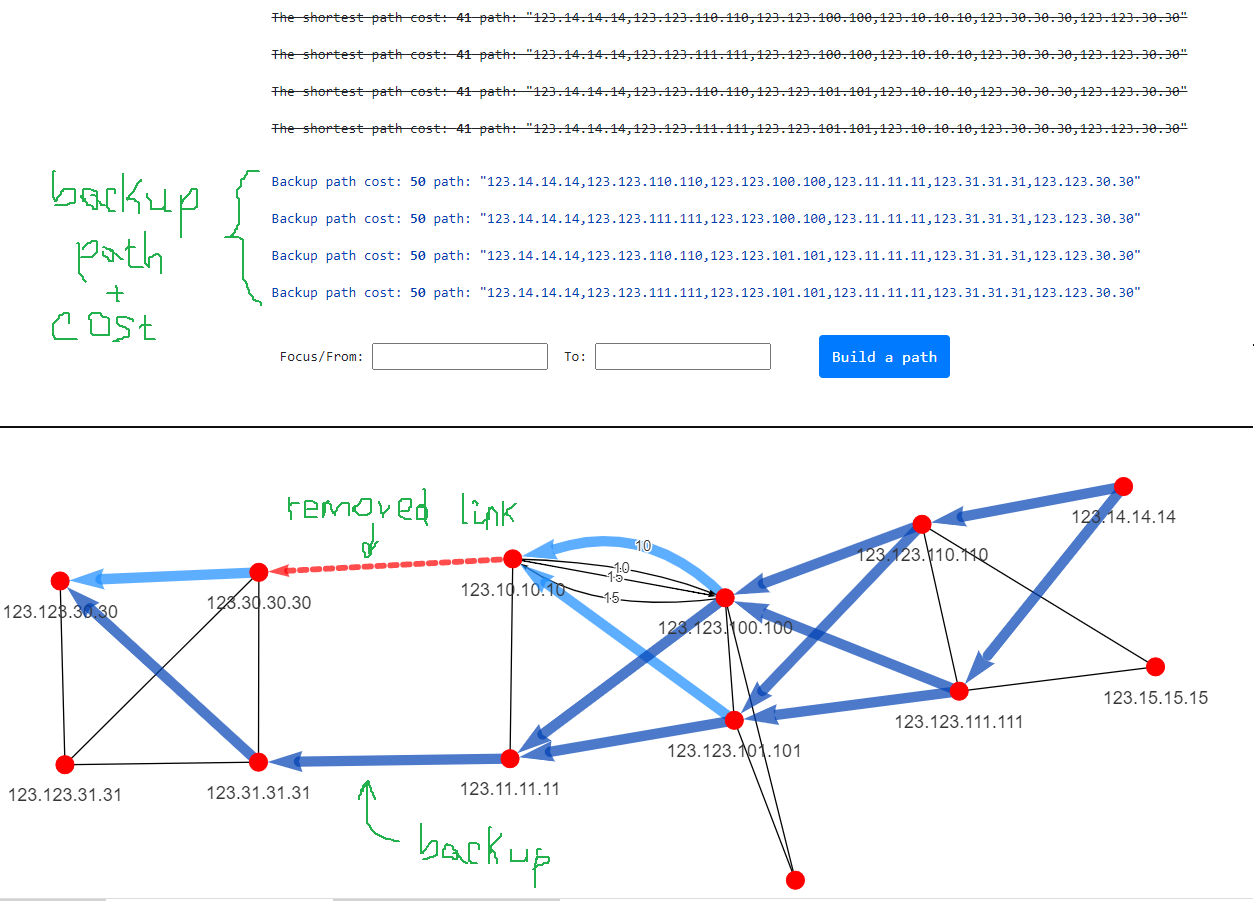 Shortest path rebuilding by changing ospf cost on the fly

Right click on colored edge and set 12. We get new traffic flow with new OSPF cost. 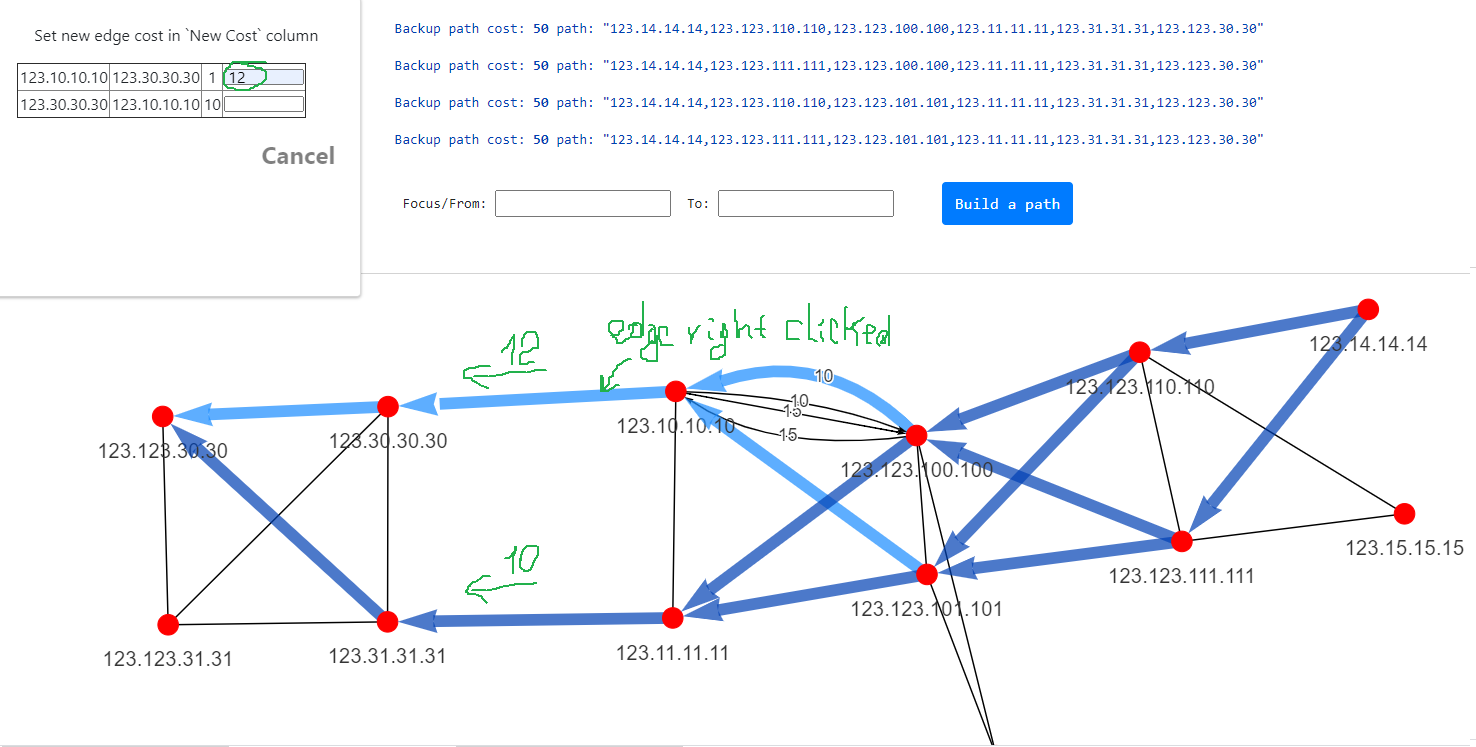 Compare state of your network in different time

When you perform some configuration changes (add new network, redistribute another protocol to OSPF or change filters in existed route-maps) it is highly desire to make sure that results of you action give you expected changes in OSPF network. In order to do this - upload your network before your changes and right after it and compare them. What will be shown:

In this mode it's possible to simulate a link or router shutdown/outage. The topology will be re-pained with expected changed traffic flow avoiding failed link or router.

Network reaction if a link/s goes down. Simulate link down.

Upload a graph if did't do it before and press on NetworkReactionOnFailure.

We also can see an expected increasing rate of blue painted edge.

Network reaction if a network devices goes down. Simulate device down.

Right click on a node and choose `shutdown this node`. The algorithm escape this node.

Under NetworkReactionOnFailure tab it is possible to see a network reaction on a OSPF cost change on the fly. Set new OSPF cost in righted-clicked edge menu. 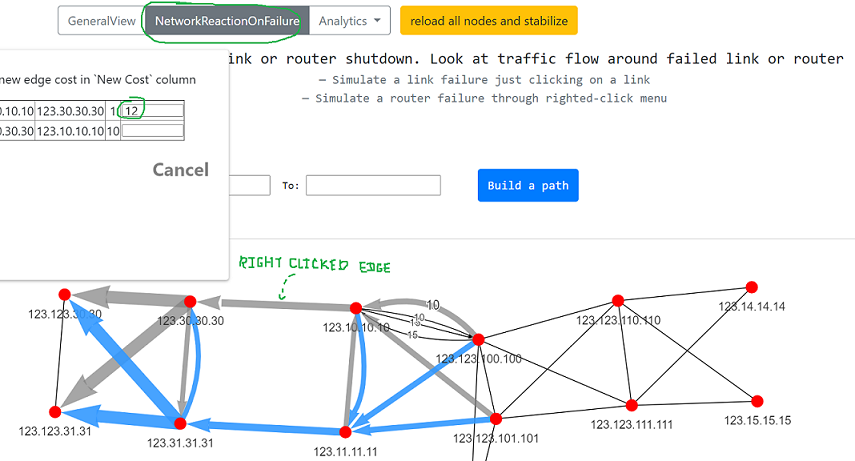 In this mode it's possible to run algorithms in order to check your OSPF network.

Print out any asymmetric paths from different points of views.

We get a list of nodes which have asymmetric paths. Just checking them - we can see difference in incoming and Outgoing paths.

Main and backup paths via the same ECMP.

We suggest that if we have multiple links bounded to ECMP and if the main link in ECMP goes down, the backup path should go via the second link in ECMP. 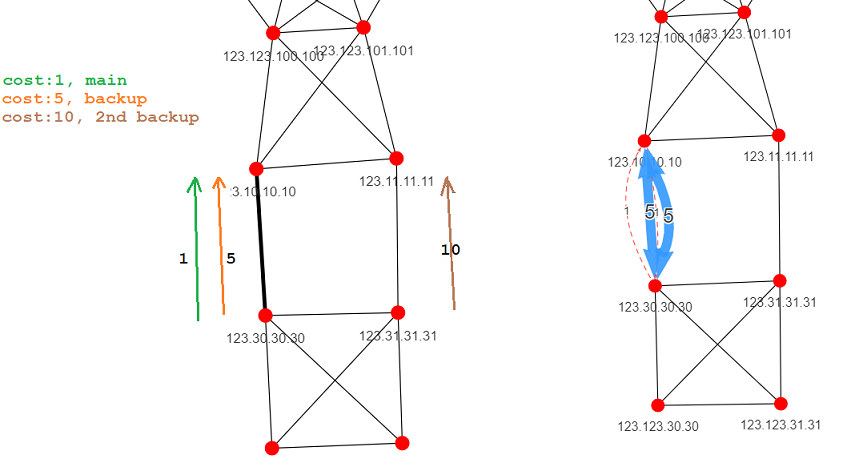 If backup path goes not via ECMP and chooses completely different path - the report will be treated as failed.

This report checks that if two locations are directly connected, backup paths should be only between two locations and do not go via third location as transit. Before running this report - it's needed to create groups (~site names/locations) and assign devices to groups. For example, there are two locations in France: the main site (EU_FRA) and the remote site (EU_FRA1). The same schema with offices in Italy. The main offices in France and Italy are connected to each other and have main (OSPF cost 10) and backup (OSPF cost 20) link. 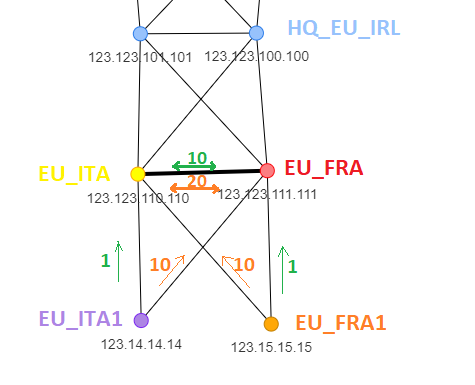 If the main link between main offices goes down - the backup path goes via remote offices! 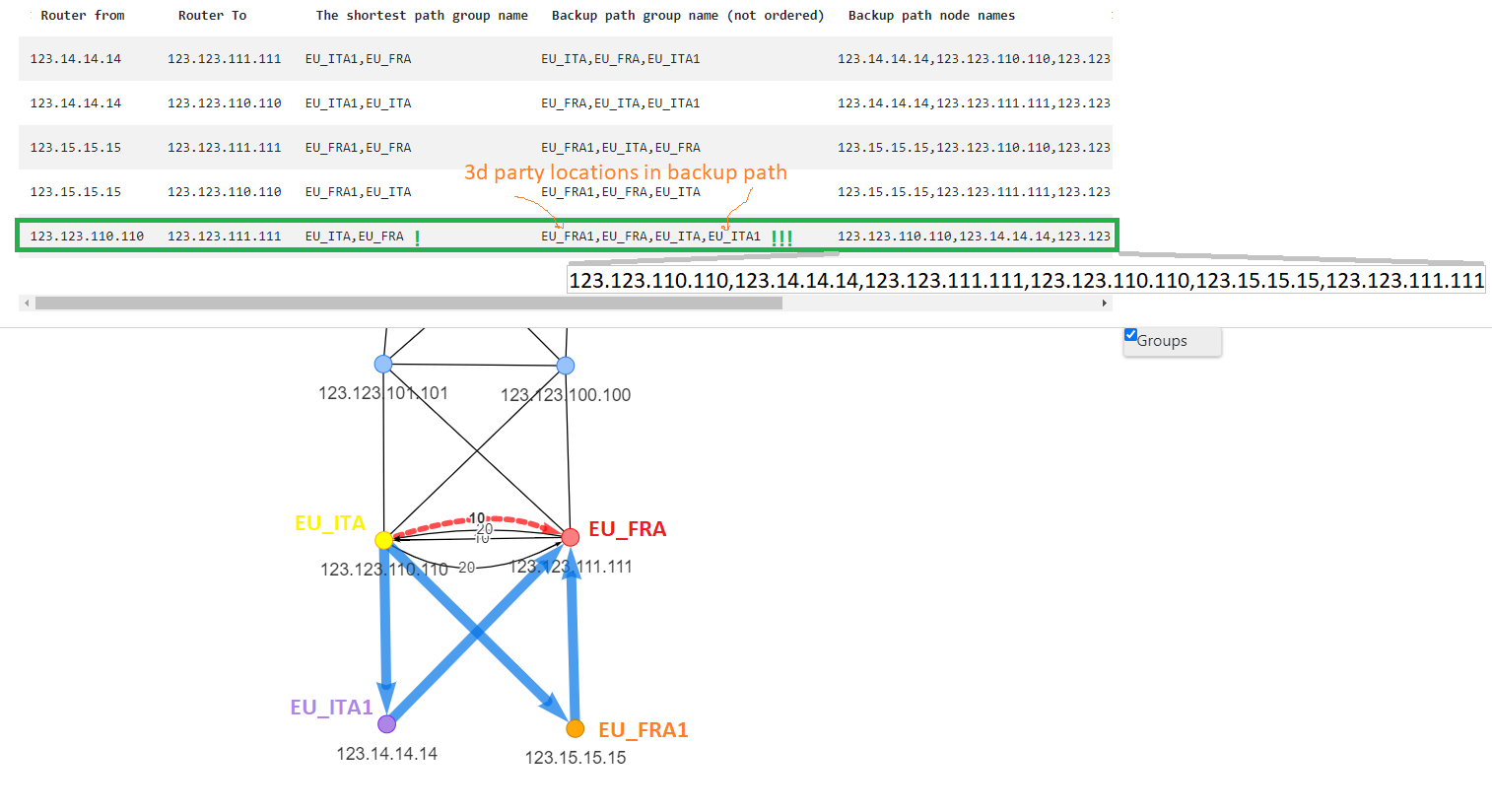 Under Analytics tab it is possible to see how many terminated subnets are backuped via terminating the same subnet on different devices.

Click on a node in order to find out which networks are backuped which not.

As we can see only own device's loopback is not backuped - it is normal.

It's time not to depends on NAPALM support of the vendor. You are free to choose your favorite NetDevOps tool like Ansible, netmiko, Nornir, etc, and upload your OSPF network graph to Topolograph via a POST request. Once you uploaded the graph - you get the difference with previously uploaded graphs, specifically, you will receive: new/old OSPF adjacencies (edges on the graph) new/old devices in OSPF topology number of backuped and non backuped subnets in the topology

It's needed to create an account with email/password on Login/Registration page as well as add your source IP/Network to authorised source network list under API tab.

Save the output from commands describing OSPF LSA1, LSA2, LSA2 and save it in the single file - cisco_lsdb_output.txt

Using python we read the content of the file and push it (it's better to say - POST it) to the topolograph.